If you suspect you may have Dupuytren’s disease or contracture you will need to make an appointment to see your doctor. For more information, call us. We have convenient locations in Fort Myers FL, and Port Charlotte FL to serve you.

What is Dupuytren’s Contracture?


Dupuytren’s disease is a painless, and harmless, condition in which the layer of tissue underneath the skin of the palm and fingers, called the fascia, thickens and tightens. Over time this causes nodules, or knots, to form resulting in the fingers being pulled inwards towards the palm. This is known as Dupuytren’s contracture. It can affect any finger but commonly involves the ring and little fingers and causes the proximal and middle joints (the joints closest to your palms), to become bent and hard to straighten. Treatment will vary depending on the severity of the nodules. In many cases, Dupuytren’s contracture progresses very slowly, and may not become troublesome over many years. For some patients, the condition may never progress beyond developing lumps in the palm and may not need treatment if the symptoms remain mild. However, in moderate to severe cases, treatment may be necessary to help ease the contracture and improve motion. It is more common in men, especially of Northern European background.
It is unusual before the age of 40, but is most often severe if it starts at a younger age. Treatment is only necessary if the disease progresses to the point where the digits begin to contract. Visit the International Dupuytren Society website for more information.

What Are The Symptoms Of Dupuytren’s Contracture?


A lump or pit in the palm is often the first symptom. The lump may or may not be painful in the beginning. It is typically at the base of the ring finger, but may also involve any finger or the thumb. This happens when the cords grow into the finger causing them to bend, and prevent the finger from straightening. This may result in difficulty with basic tasks such as picking up change, wearing gloves, or putting your hand in your pocket.


Although the cause of Dupuytren’s disease is not known, there is strong evidence to suggest that genetics play the most important role. In addition to a family history, there are a number of other factors believed to contribute to the development or worsening of the condition. These include:

• Gender. Men are more likely to develop Dupuytren’s than women.
• Ancestry. People of northern European (English, Scottish, Irish, Dutch and French) and Scandinavian (Norwegian, Swedish, Danish and Finnish) descent are more at risk of developing the condition.
• Alcohol use may be a risk factor for developing Dupuytren’s.
• Smoking is believed to increase the risk of Dupuytren’s.
• Certain medical conditions. People with seizure disorders and diabetes are more prone to developing Dupuytren’s.
• Age. It generally develops between the ages of forty and sixty and is unusual before the age of 40. It is more severe if it starts at a younger age and the incidence increases with age.

Abnormal proteins are thought to play some role in the progression of the disease as well. People often relate Dupuytren’s to an accident or injury, but there is no clear link between injury and Dupuytren’s Contracture.

What are the Treatments for Dupuytren’s?


There is currently no cure for Dupuytren’s. Treatment is recommended when the inability to straighten the finger causes difficulty with function. Traditionally, Dupuytren’s treatment involves surgery which includes removal of the abnormal tissue, allowing the fingers to straighten. It is impossible to remove all of the diseased tissue. The disease may come back or extend beyond the original area even after surgery. If the contracture has led to stiffness, surgery may involve working on the joints in the fingers. Although usually effective, open Dupuytrens’ surgery may require wound care and can also lead to joint stiffness. Therefore, Hand Therapy is often necessary to achieve best outcomes in recovery.

There is a minimally-invasive alternative that is performed in the office. This is known as needle aponeurotomy (or percutaneous fasciotomy). Needle aponeurotomy, uses local anesthesia. It involves cutting contracted fibers beneath the skin with the tip of a small needle. The goal is to cut the ‘cord’ of abnormal tissue, resulting in straighter fingers. This is a less invasive alternative than full surgery. There are many advantages to needle aponeurotomy. The time spent at the office is minimal compared with time spent in the operating room. A recent study has shown that needle aponeurotomy is an effective, long lasting, and safe Dupuytren’s contracture treatment. Like any procedure for Dupuytren’s, there is a chance of recurrence and need for further surgery. Also, the cost of the procedure in the Florida Hand Center office is significantly less than when performed in the hospital. Recovery generally takes one week, and most activity can be resumed immediately after the procedure.

How is Dupuytren’s Contracture Diagnosed?


The Doctor will ask about your general health, medical history and symptoms and may also want to know if you are aware of any family medical history of Dupuytren’s, due to the hereditary nature of the disease. During the exam, the doctor will:

• Make a note of the location of nodules and cords on your palm.
• Measure the range of movement in your fingers and thumb. Your doctor will use these measurements at future appointments to monitor how the condition is progressing over time.
• Compare your hands to each other and will check for knots or toughened bands of tissue.
• Test your grip and ability to pinch.
• Test the sensations in your fingers and thumb.
• In some cases, clinical photographs will be taken for future reference to monitor changes.
• A “table top” test involves the patient placing the palm of their hand on a table or other flat surface. If you have Dupuytren’s contracture it is unlikely that you will be able to do this.

The presence of pain or numbness should prompt the consideration of other diagnoses seen with stiff fingers including arthritis, trigger finger, carpal tunnel, etc. Following the exam, the doctor will discuss their findings with you and will decide on an appropriate course of treatment.

If you or a loved one would like to know more about Dupuytren’s contracture, contact Florida Hand Center today!  We are an advanced medical facility dedicated to the treatment of hand and arm conditions with locations in Port Charlotte FL and Fort Myers FL and are proud to serve patients statewide. Call us or schedule an appointment today! We serve patients from Port Charlotte FL, Fort Myers FL, Punta Gorda FL, Cape Coral FL, Estero FL, Harbour Heights FL, Lake Suzy FL, Murdock FL, Charlotte Harbor FL, and Solana FL.

Additional Services You May Need 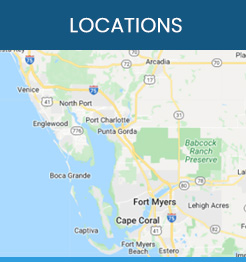 Convenient Locations To Serve You

*In case of a life threatening emergency, immediately call 911.
**For any medical procedures, patients may respond to treatment differently, each patients results may vary.
***Information on this site is not intended or implied to be a substitute for professional medical advice, diagnosis or treatment. All content contained on or available through this site is for general information purposes only.
****By using this website and sending us your information, you are giving us permission to contact you by electronic and non-electronic means. We also track the conversions and collect user data to improve marketing.
*****If you are vision-impaired or have some other impairment covered by the Americans with Disabilities Act or a similar law, and you wish to discuss potential accommodations related to using this website, please contact us.

Convenient Locations To Serve You